Film / The Silence of the Hams 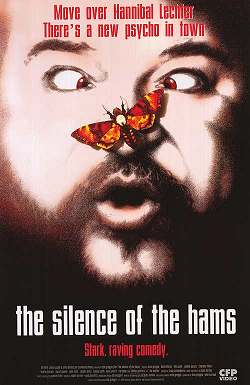 The Silence of the Hams is a 1994 spoof movie of the Rapid-Fire Comedy type. It combines and spoofs the plots of The Silence of the Lambs (FBI Agent consults with a convicted killer) and Psycho (woman steals money from her employer before being murdered by an insane motel manager).