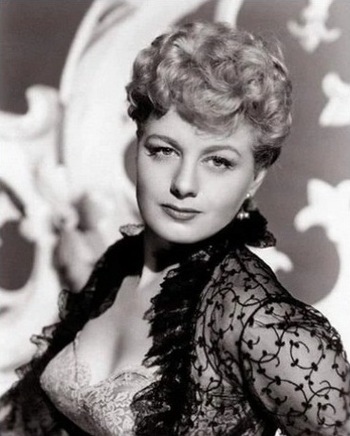 "I have bursts of being a lady, but it doesn't last long."
Advertisement:

Shelley Winters (born Shirley Schrift; August 18, 1920 – January 14, 2006) was an American actress who won the Academy Award for Best Supporting Actress twice, for The Diary of Anne Frank (1959) and A Patch of Blue (1965). She is also known for her appearances in such films as A Double Life, A Place in the Sun, The Night of the Hunter, Lolita, Alfie, The Poseidon Adventure, and Next Stop, Greenwich Village. She also made occasional appearances on television, including the recurring role of Nana Mary on Roseanne.

She was married four times, including to fellow actors Vittorio Gassman (with whom she had one child) and Anthony Franciosa.