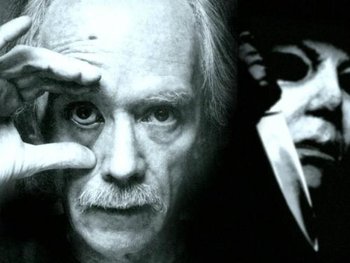 Are you afraid of the boogeyman?
Advertisement:

John Howard Carpenter (born January 16, 1948) is an American film director, screenwriter, and musician. He's known primarily for his work in the horror and science fiction genres. His career is speckled with films considered genre classics, as well as a number of movies that initially performed poorly at the box office, but went on to be Vindicated by Cable.

His films are characterized by minimalist lighting and photography, static cameras, use of steadicam, distinctive synthesized scores (usually self-composed), and recurring use of In Case You Forgot Who Wrote It. Many of today's best directors, including Tim Burton and Christopher Nolan, state that they were heavily influenced by Carpenter's style and filmography.

Since the release of Ghosts of Mars in 2001, he has gone into a state of semi-retirement, although he returned to the director's chair for several episodes of Masters of Horror and the movie The Ward.

On February 3, 2015, he released his debut non-soundtrack album under the indie label Sacred Bones Records, Lost Themes and its follow up Lost Themes II on April 15, 2016. He also composed his first TV series theme for Zoo.

In May 2016, it was confirmed that Carpenter would be returning to the Halloween franchise on its 11th entry as executive producer in addition to providing the score.

He's widely regarded by interviewers, fans, and coworkers as one of the chillest old dudes in Hollywood. Although he's been in a state of semi-retirement since 2010, when asked

if he would ever direct again, he said that he might, but first he'd have to stop spending all his time watching basketball and playing video games.

Films (and other media) by John Carpenter (director unless otherwise noted):

Tropes used in John Carpenter's works as a whole: