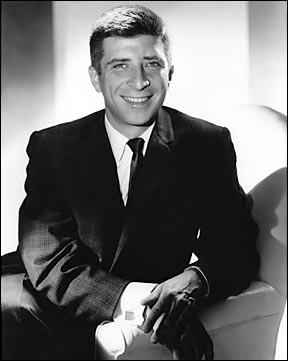 "An interviewer once asked me to discuss my collaboration with Elmer Bernstein, and precisely why I chose to work with him. My first thought was, How could I not work with Elmer, when I had the chance? Simply put, he's the best there is – the very best."
— Martin Scorsese
Advertisement:

One of the greatest film music composers in the history of American film, Elmer Bernstein (April 4, 1922 – August 18, 2004) was born in New York City. While in his teens, his piano teacher realized he had a creative gift and later was introduced to the legendary Aaron Copland. Copland being impressed, sent him at the age of 13 to see a gifted pupil, Israel Sitkowitz. He subsequently enrolled at the Juilliard School in New York, where he continued as a piano student and also took up composition. During the late 1950s and early 1960s, it became necessary to differentiate between two very successful and popular composers/conductors with apparently the same last name — Bernstein. Leonard Bernstein (pronounced Burn-STINE) was the famous pianist/conductor of the New York Philharmonic, star of the enormously popular Young People's Concert series that introduced classical music to the younger generation, and acclaimed composer of numerous concert and musical theater works, including West Side Story and On the Town. Elmer Bernstein (pronounced Burn-STEEN), also a concert pianist, earned his acclaim in the West-coast film industry, composing some of the most memorable, melodic, and exciting film scores over five decades. This is the man who wrote music for Moses, The Magnificent Seven, the Cooler King, Scout and Jem, Rooster Cogburn, the Ghostbusters, Daniel Day-Lewis, and Martin Scorsese. So, lest there be any confusion identifying the two (and to dispel the myth that they were brothers), Leonard became known as Bernstein East (signifying New York), and Elmer was dubbed Bernstein West. note  It helped that when they first met they quickly became good - if occasionally rather competitive - friends.

After completing his first three Hollywood film scoring assignments between 1950 and 1952, the composer became another in a long list of liberal-minded professionals who Senator Joseph McCarthy considered a threat to the American way of life because of alleged Communist leanings—accusations which of course were fabricated to bolster McCarthy's own political agenda. Undaunted, Elmer quietly persevered by taking on a series of low-budget science fiction movies, where minuscule budgets forced him to use creativity and ingenuity to compensate for a lack of resources. (Cat-Women of the Moon and Robot Monster are fun favorites of all serious Elmer Bernstein devotees.)

In an interview conducted for a book on film composing, Elmer once said that the wonder of music is that the listener doesn't need to bring anything to the table. He or she doesn't need to have an intellectual understanding of it, a knowledge of how it is made, or even why it was written. The listener can respond to it purely on an emotional level. Director John Sturges once remarked that he could direct an actor to look out a window, but Elmer's music could tell you what that actor was thinking or feeling.

Bernstein died in his sleep on August 18th, 2004 at the age of 82 (shortly after the death of another legendary composer, Jerry Goldsmith).

Throughout his career, Elmer Bernstein received 14 Academy Award nominations (winning one; he also holds the record for being the only person to be nominated at least once per decade from the 1950s to the 2000s), an Emmy Award, and two Golden Globe Awards, and was nominated for the Tony Award three times, and a Grammy Award five times.

He has his own page of awesome music to listen to.

His most notable scores include:

Some interesting statistics about Elmer Bernstein: