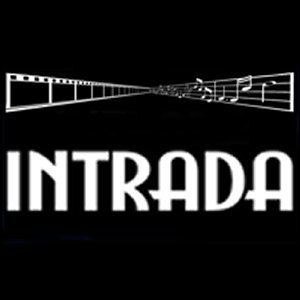 The company logo, not the Spanish word for entrance.
Advertisement:

Intrada is a label which specialises in soundtrack albums for films and television series. Unlike other labels in this field (Varèse Sarabande, La La Land Records, Silva Screen Records), Intrada began as a retail store in 1984, located in San Francisco and run by Douglass Fake and Roger Feigelson and selling (you guessed it) soundtrack albums.

In 1985 the store licensed its first self-produced album, working with MGM to release Basil Poledouris' Red Dawn (1984); in 1986 Intrada made another deal with MGM to issue Jerry Goldsmith's Poltergeist II: The Other Side, the first of many albums they would do with the composer (in 1993, when the label discovered they had overpaid for the reuse fees, they were able to issue a considerably longer version of the album - Red Dawn was also expanded). The label has built a number of good relationships with composers like Goldsmith, Poledouris, Bruce Broughton and Bill Conti, in addition to working regularly with the major studios like 20th Century Fox (always one of the most soundtrack-friendly studios, even after the Disney buyout) and more impressively, given the studio has always known the commercial value of its music, Disney (Intrada released albums for several Disney films in the 1990s, like Honey, I Blew Up the Kid and A Far Off Place - in recent times Intrada has released soundtracks co-branded with Disney or its subsidiaries, starting with Up and including Toy Story 3, Oz the Great and Powerful, The Avengers, the first three movies in the Tinker Bell series and others).

The store moved to Oakland in 1999, and continues today (both the physical and online store sell albums from other labels); Douglass Fake also has the distinction of having scored a film himself, 1998's Holly Vs. Hollywood (directed by Intrada's Jeff Johnson). No prizes for guessing what company released the soundtrack.