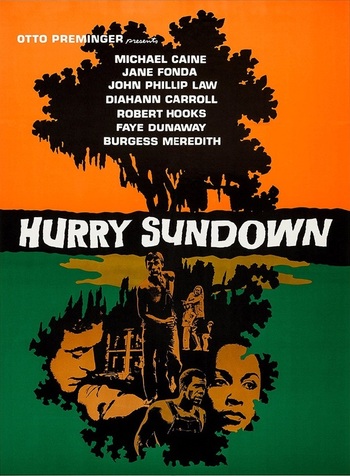 Hurry Sundown is a 1967 American drama film produced and directed by Otto Preminger, starring Jane Fonda and Michael Caine. The screenplay by Horton Foote and Thomas C. Ryan is based on the 1965 novel of the same title by K.B. Gilden.note A pseudonym for the married couple Katya and Bert Gilden.

In 1946, the bigoted and gold-digging Henry Warren (Caine) and his wife, heiress and land-owner Julie Ann (Fonda), are determined to sell their land in rural Georgia to owners of a northern canning plant, but the deal rests on selling two adjoining plots as well: one owned by Henry's cousin Rad McDowell (John Phillip Law), the other by black farmer Reeve Scott (Robert Hooks), whose ailing mother Rose (Beah Richards) had been Julie's wet nurse. Neither farmer is interested in selling his land, which results in their entering into a dangerous and controversial interracial partnership to strengthen their legal claim to their land. This naturally infuriates Henry, who is prepared to do anything to fulfill his wishes.