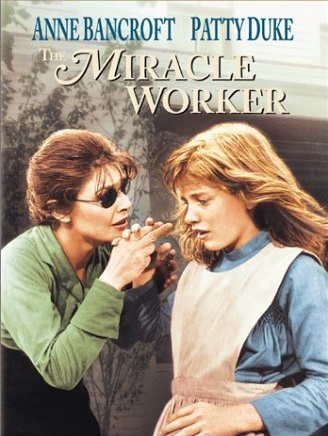 "I wanted to teach you- oh, everything the earth is full of, Helen, everything on it that’s ours for a wink and it's gone, and what we are on it, the- light we bring to it and leave behind in- words, why, you can see five thousand years back in a light of words, everything we feel, think, know- and share, in words, so not a soul is in darkness, or done with, even in the grave. And I know, I know, one word and I can- put the world in your hand- and whatever it is to me, I won’t take less!"
— Annie Sullivan, Act III
Advertisement:

The Miracle Worker is a play by William Gibson (not that William Gibson.) Written in 1956, it tells the true story of how Anne Sullivan became the teacher and companion to deaf-blind Helen Keller.

The play premiered in 1957 in a Playhouse 90 broadcast. In 1959, it was shown on Broadway with Anne Bancroft as Annie Sullivan and Patty Duke as Helen Keller. In 1961 it was performed in London’s West End starring Anna Massey and Janina Faye.

There have been three movie adaptations. The best known is the 1962 version, with Anne Bancroft and Patty Duke assuming their Broadway roles. Both actresses won Oscars for their roles; Bancroft for Best Leading Actress and Duke for Best Supporting Actress (who at 16, was the youngest Oscar winner at the time). In 1979, Patty Duke took on the role of Anne Sullivan and Melissa Gilbert played Helen. In 2000, Disney took its shot at the story, with Alison Elliott and Hallie Kate Eisenberg. The 1979 and 2000 versions were released direct to TV.

The play has been critically acclaimed, making the cover of Time magazine, and has won several Tony Awards.

The Miracle Worker contains examples of: