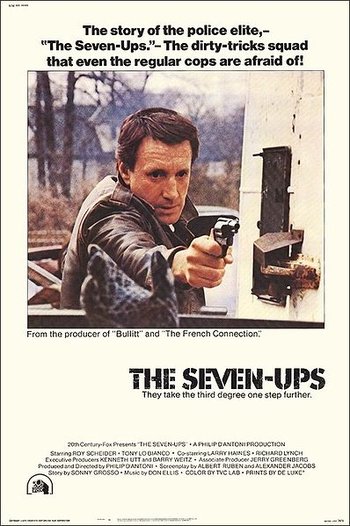 The Seven-Ups is a 1973 American crime thriller film produced and directed by Philip D'Antoni. It stars Roy Scheider as a Cowboy Cop who is a loose remake of Buddy "Cloudy" Russo from The French Connection.

Det. Buddy Manucci (Scheider) has been getting flak from his higher-ups at the NYPD because his team of renegade policemen, known as The Seven-Ups, has been using unorthodox methods to capture criminals and secure prison terms of seven years or more.

The film begins as the team ransacks an antiques store that is a front for the running of counterfeit money. Recently, there's been a rash of kidnappings, but it seems that only upper echelon criminals are the ones getting abducted, such as Max Kalish, whose ransom is paid at a car wash. Manucci tries to figure out the puzzle, with help supplied to him by an informant who turns out to be untrustworthy, leading to the death of one of the Seven-Up officers. Manucci figures out the puzzle, but not before The Seven-Ups splinter from the fallout of the film's events, and Manucci's life is placed in jeopardy.