Film / Emperor of the North 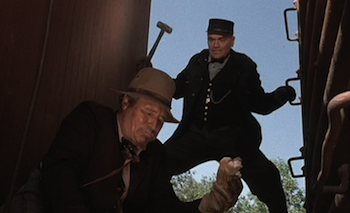 Nobody rides his train for free.
Advertisement:

Also known as Emperor of the North Pole, this 1973 film was directed by Robert Aldrich and stars Lee Marvin, Keith Carradine, and Ernest Borgnine.

During The Great Depression, legendary hobo "A no. 1" (Marvin) vows to be the first man to successfully hitch a ride on the train run by the brutal conductor Shack (Borgnine), who has vowed to prevent such a thing from ever happening, in competition with a young upstart who is known as Cigaret (Carradine). The resulting battle is memorably bloody.