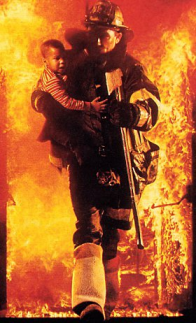 Where there's smoke, there's... wait, where's the smoke?
"It's a living thing, Brian. It breathes, it eats, and it hates. The only way to beat it is to think like it. To know that this flame will spread this way across the door and up across the ceiling, not because of the physics of flammable liquids, but because it wants to."
— Donald "Shadow" Rimgale, Backdraft
Advertisement:

Fires are always an opportunity for major drama and heroics: How better to show that The Hero is a real badass than by having him literally walk through fire? And how better to show that he's selfless than by having him save someone (preferably a child) from a burning building? Hollywood Fires are distinguished by lots and lots of flames... so many flames, in fact, that they cover nearly every object around. The flames obscure sight and form obstacles that can be dramatically jumped through. Burning debris is all over the place and falls from the ceiling to dramatically block escape routes. Also, in more action-oriented shows, the fire tends to stay strangely toned-down and never exceed certain boundaries, allowing enough room for an epic fight over a fire.

Interestingly enough, smoke is usually nowhere to be seen. Additionally, the burning environment is stable and does not collapse or fall (except for the already mentioned falling debris) for as long as it takes for the hero to strut his stuff. Only when he's leaving the fire does a burning building suddenly explode in flames and possibly collapse.

In Hollywood, fire is dangerous and deadly, but not so much that the Main Characters can't charge in and get everyone out just in time without suffering so much as a first-degree burn.

In reality, any fire bigger than a typical hearth (a few feet or so wide and generated by a few logs) is hot enough that it's dangerous for a human to even approach, let alone enter; a fire the size of a building would generate interior temperatures upwards of 1,000 degrees Celsius - way in excess of what any human being could survive. More importantly, any large burning area would be completely filled with very dense and very deadly smoke (the vast majority of people who die in fires are killed or incapacitated by the smoke, which could be considered a mercy for those who would otherwise have burned to death - but not so much for those who would otherwise have escaped, or never been reached by the flames). Needless to say, the incredible temperatures caused by actual towering infernos are infamous for the structural damage they can cause - they don't even need to melt things, merely making any metal joints and whatnot somewhat more pliant is more than enough to push a building past its engineering tolerances.

There are two main reasons for all this:

It may involve Outrun the Fireball. It also often the only explanation for how a Hero can walk Out of the Inferno and not be burnt to a cinder. See Convection Schmonvection (and, in video games, Lava Is Boiling Kool-Aid) for the lava-related equivalent. For materials that burn far more easily in fiction than in Real Life, see Made of Incendium.