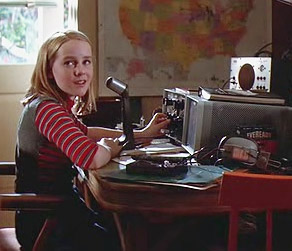 Anybody who has used a Two Way Radio, or even a walkie talkienote old-school walkie-talkies are CB radios, but generally low-power and limited to a single frequency, most often CB channel 14, knows that there are certain rules. You need to wait until the other person is finished talking (thus the reason for the oft-lampooned "Over"). There are range limits. Two people talking at once sounds like garbage. While there are plenty of frequenciesnote originally 23, later expanded to 40 and complicated by "sidebands", and you need to coordinate which one you'll be on, other people use them too. Sometimes people aren't sitting right next to the radio, or don't have it turned on, so they won't reply immediately.

In Hollywood Science, radios are basically telephones: when you talk into the radio, the radio has at least as much range as you need, the person you want is on the line—and just them, unless the plot requires someone to eavesdrop. You can interrupt conversations, talk over someone else, and everybody hears you just fine. Sometimes two people can be heard at once. Except for a little well-timed Walkie-Talkie Static, everything is perfectly clear.

Named for the most common culprit, the Citizens' Band (CB) radio. This appears to be entering Forgotten Trope territory with the advent of smartphones and the Internet - in particular, Twitter has been touted as the spiritual successor to CB