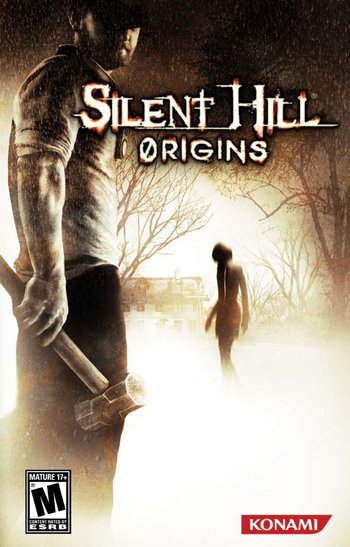 Jack says the town is located on
old "spiritual ground"...
Hopefully we
will be blessed!

A prequel released for the handheld PlayStation Portable and later ported to the PlayStation 2, Origins is a retelling of the events that happened seven years before Silent Hill. It stars a trucker named Travis Grady, whose attempts to take a shortcut through Silent Hill get sidetracked by a figure running onto the road and a house on fire. After bailing a mysterious (and very, very crispy) girl out of her house, he passes out and awakes in the completely deserted streets of Silent Hill. His attempts to find out what exactly happened to the girl lead him all over the town and eventually get him embroiled in mysterious cult activity, as well as the troubled past of his that appears to be a prerequisite for Silent Hill protagonists.

Although Origins faithfully sticks to the Silent Hill formula for creepy atmospheres, nightmare worlds, and baffling puzzles, it introduces Breakable Weapons and being able to switch over to the Otherworld via mirrors—in practice, this just means twice as many areas (of which half are just a grimdark version of themselves) to explore.

Characters in Origins, with the exception of Travis himself, are all younger versions of the characters found in Silent Hill — Dahlia, Lisa, and Kaufmann. They wear different clothes and have slightly different personalities, but are ultimately the same.