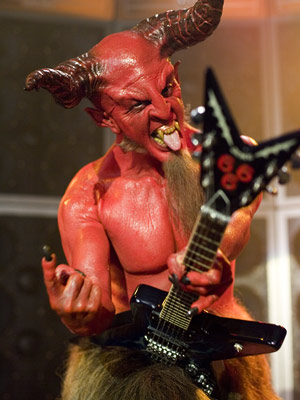 The devil can play a wicked guitar!
"Well, at least I don't look like a giant ketchup bottle!"
— Suction Cup Man to Satan, "Suction Cup Man 3: One Hell of a Climb"
Advertisement:

In Western media, Christian demons and devils often have a very specific appearance. You can usually spot them by their horns, batlike wings, red skin, goatee, furred legs with hooved feet, and sometimes a trident or pitchfork. The horns and hooves are typically goat- or ram-like, but bull-like examples also exist. Satan himself often takes this appearance.

That said, not all of the characteristics are necessary for a character to qualify in this trope. In fact, they don't even have to be red! The character/creature simply needs enough to invoke this classic depiction of demons and devils. The character isn't required even to be a demon. This can apply to characters that are possessed by demons, drawing power from dark powers or magic, or simply come from a race that resembles this type of creature.

This trope has had a long evolution to its modern form. Many characteristics also have their own origin. The red skin seems to have started out as the red clothing worn by Mephistopheles in Johann Wolfgang von Goethe's Faust in his guise of a cavalier; this is also the source of the Beard of Evil. The horns came as accessories to the older cloven hoof, which likely comes from Pan and the Fauns and Satyrs of Classical Mythology. Originally the deformed feet were more varied, duck feet, cock's claws, and horse's hooves being sometimes featured. Bat wings were used to show that the demons were fallen angels. Most of these characteristics are not found in representations of devils before the 13th century A.D. Earlier visualizations of devils gave them dark or black skin, as in literally burned black by hellfire, which "red hot" skin still connotes in a way.

Given the many types of demons and devils in mythology and fiction from the world over, few examples can be counted as aversions or subversions. To qualify as such, there must be clear expectations for a demonic character to look like this; if the vast majority of demons and devils in a fictional universe are not explicitly established to fit this trope, a Lampshade Hanging is required.

The color is opposed by Heavenly Blue.

Compare Grandpa God, Red and Black and Evil All Over and Satanic Archetype. Contrast Red Is Heroic, Heavenly Blue. For a less infernal type of creature with goatlike horns and hooves, see Fauns and Satyrs. For another common depiction of the devil, see Dragons Are Demonic (and by extension Snakes Are Sinister).

Not to confuse with Flaming Devil, which is about Satan being fabulous.

One of the things Danny does to try and "lull the boy to sleep" is an army of hard-rocking demons.

One of the things Danny does to try and "lull the boy to sleep" is an army of hard-rocking demons.