A Beast in Name and Nature 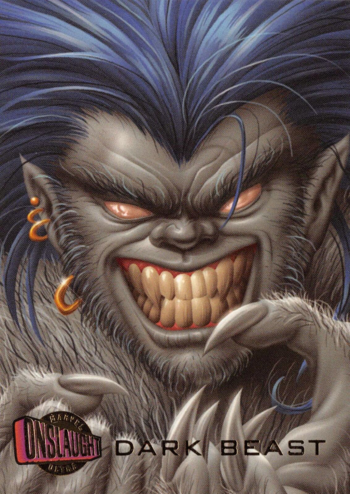 In fiction, there's a popular tendency for especially fearsome characters to be known as "The Beast," or some variation on this theme. A subtrope of Names to Run Away from Really Fast, the reasons for this particular moniker vary from depiction to depiction, though rarely for positive ones.

In some cases, this is due to the character possessing some animalistic attribute, a "beastly" appearance or nature . In others, this is due to brutish, violent or savage behavior, a close tie-in with the first reason possibly to the point of being a Feral Villain. Alternatively, it will be associated with the titular beast of Christian theology and the Book of Revelation, there may be some connection with the demonic or diabolical; the Mark of the Beast may be utilized.

Other times, the character in question is literally an animal — only so monstrous or so indescribable that giving it any name other than "beast" simply will not suffice.

On occasion, a hero may end up with this name for similar reasons — but not often.