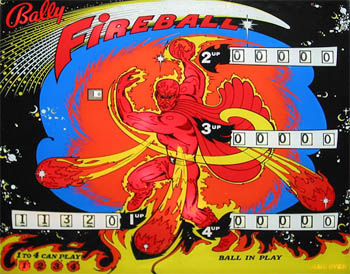 The game that hooked Mr. Belvedere
"It's Red Hot!"
Advertisement:

Fireball is an electro-mechanical arcade pinball table designed by Ted Zale with artwork by Dave Christensen. It was released in 1971 by Bally.

In this game, the player is out to challenge the Fire Gods in his quest for a high score. Master the Skill Shot incline, activate the kickback, then hit the center target to close the Zipper Flippers. Lock a ball in the Odin and Wotan saucers, then hit the captive ball to Release The Fire Gods for triple-scoring multiball action. But there's no time to rest, because the spinning playfield disc will catapult your balls in unexpected directions.

Fireball was the first pinball machine to use a spinning disc in the playfield, which was advertised as a "whirlwind spinner". Its stunning artwork, uncomplicated rules, and nonstop action captivated players, making it one of the iconic pinballs of The '70s. It was remade and re-released several times, including an In Name Only home version in 1976, a sequel (Fireball II) in 1981, and a remake (Fireball Classic) in 1985.

A digital version was available for purchase in FarSight Studios' The Pinball Arcade until July 1, 2018, when their license for all Williams and Bally tables expired. However, those who bought it before then can still play.