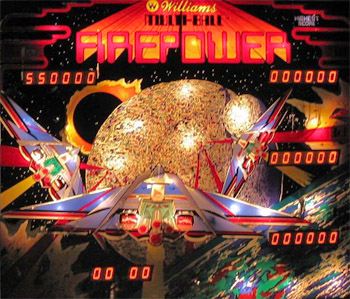 Firepower is a Physical Pinball Table designed by Steve Ritchie, programmed by Eugene Jarvis, and illustrated by Constantino and Jeanine Mitchell. Released by Williams Electronics in 1980, it is noteworthy for being the first pinball with a "lane change" feature,note The player presses the flipper buttons to change which rollover lights are lit as well as being the first solid-state game with multiball.

As with other pins of the time, the premise is an Excuse Plot to showcase the gameplay. Without warning, an alien war planet has appeared next to Earth and unleashed an army of Jet Pack-wearing invaders against humanity. In response, the player must spell FIREPOWER to increase the game's point values, hit the six targets to light the eject holes, then lock two balls into the saucers to start multiball.

Firepower is considered one of the classics of '80s pinball, a game that's simple to understand yet challenging to play, though sustaining multiball is fairly difficult due to the wide outlanes. A sequel, Firepower II, was released in 1983; designed by Mark Ritchie, it retains most of the layout and rules of the original.

A digital version of Firepower is available in Pinball Hall Of Fame: The Williams Collection. Both it and its sequel were also available from FarSight Studios' The Pinball Arcade until their license for all Williams and Bally tables expired on July 1, 2018.