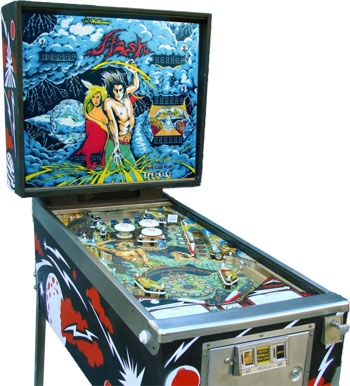 Flash is an early solid-state pinball machine designed by Steve Ritchie. It was illustrated by Jeanine and Constantino Mitchell, and released by Williams Electronics in 1979.

The player takes on the role of an unnamed Thunder God, who is out to achieve high scores by throwing bolts of divine lightning on the world below. While your admirers watch on, shoot the center bank of drop targets to build up Thunder, Lightning, Tempest, and the Super Flash, then shoot the upper-left orbits to reach the top of the playfield. Light up 1-2-3-4 for the bonus multiplier, and hit the left five-bank to increase the rewards on the saucer. As the game builds to a crescendo, don't be blinded by your lightning flashes on the way to victory.

Flash is notable for several pinball firsts — it was the first game to have a dynamic background sound during gameplay, and it was the first game to use flash lamps for a temporary burst of bright light. Despite its clean layout and simple rules, this is a fast and challenging game that rewards player attention and skill, and the only weak part of the game is the lackluster art.

Flash went on to become the third-best-selling pinball game of all time, with around 19,500 tables sold, and is an early example of many of the concepts Ritchie would bring to his later games.