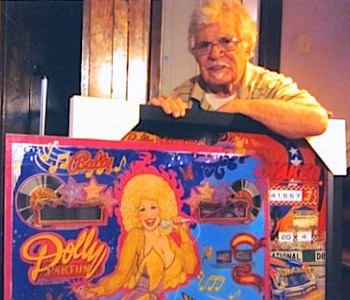 Mad Dog and Dolly.
"I'm one of the few guys in the city who’s drawing broads on the [back]glass... What the country needs is another great pornographic artist like [Leroy] Parker and I’m trying to fill his boots."
—Dave Christensen, 1974
Advertisement:

David G. Christensen is an American artist best known for his highly detailed and titillating artwork, often considered one of the top Pinball illustrators of The '70s.

A self-taught illustrator, Dave Christensen grew up in Wisconsin where he studied graphic arts. After completing his education, Dave landed a job at Bally, where he wrote and illustrated parts manuals for their slot machines. In his free time, he also tinkered with pinball designs; when his supervisors saw them, Christensen was asked to produce new graphics (as well as service manuals) for their games instead. He gladly complied, and the quality of his work quickly led to him working exclusively on art and design.

Christensen is believed to be the first artist to include his signature on pinball playfields, often signing his nickname “Mad Dog.” Dave's art is provocative in its unapologetic use of risqué motifs and sexy women — his work is brash, playful, energetic, and outrageously titillating, with a design motif taken from Comic Book art, old Republic serials, and pulp Science Fiction. Dave also indulges in his mischievous side, and often snuck in ribald references both subtle and gross in his highly-detailed backgrounds. He is also a skilled caricaturist and portrait artist, with a deft handling of celebrities that made him highly suitable for licensed games.

In addition to his illustrations for slot machines and pinballs, Dave Christensen also works with line illustration, logo design, and novelty art. His interests include belt buckles and slot machines, and in 1972 he self-published Slot Machines: A Pictorial Review, a collection of his hand-illustrated slot machine art.

Dave Christensen was inducted into the Pinball Hall of Fame in 1996. In summer 2009, Christensen's art appeared in the exhibition "Broads, Boobs and Buckles: The Pinball Art of Dave Christensen". His work is also featured in the book Mad Dog and His Art by Gene Cunningham. He is also commemorated with the annual Dave Christensen Pinball Tournament in Thalwil, Switzerland, where players compete exclusively on machines he illustrated.

Dave Christensen's artwork can be seen in the following games:

Tropes appearing in Dave Christensen's work and career include: