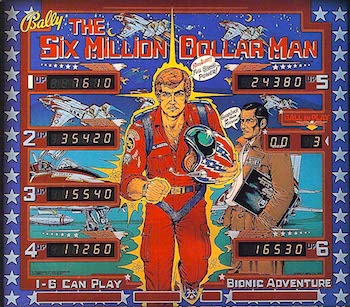 This is all the bionic™ action in the game
Steve Austin: "Red alert! Full BIONIC™ power!"
Advertisement:

The Six Million Dollar Man is an arcade pinball game released in 1978 by Bally. It was designed by Greg Kmiec and illustrated by Dave Christensen.

As the name indicates, this table is based on the popular seventies television show starring Lee Majors. It is a quintessential example of early solid-state pinball — shoot the top saucer to advance the bonus multiplier and light the outlanes for a Special, and complete the five-bank drop targets to increase the awards. Complete the Bionic Power Awards for a 50,000 point bonus and to open the ball-save gate, then make yourself invincible by hitting the center stand-up target to raise the up-post between the flippers, blocking (almost) every exit on the field.

The Six Million Dollar Man is notable for being the first solid-state pin to support up to six players, and the only six-player game from Bally. Aside from that, it's a respectable game from pinball's golden age, with solid albeit unremarkable gameplay and a good balance of things to shoot for. Over 10,000 units were made, and it is still in fairly high demand by collectors looking for some nostalgic fun.