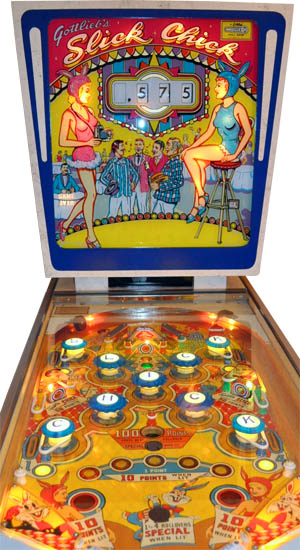 "One of the finest, if not the absolute finest flipper skill game ever made."
—Pinball historian Dick Bueschel
Advertisement:

Slick Chick is a pinball table released by Gottlieb in 1963. Designed by Wayne Neyens and illustrated by Roy Parker, it is highly prized by connoisseurs as a true classic of the electro-mechanical era.

In the early 1960s, the success of Playboy magazine led Hugh Hefner to open Playboy Clubs nationwide. Dave Gottlieb tasked designer Wayne Neyens to create a game capitalizing on the trend without actually using the name or the license. Neyens and Parker responded with Slick Chick, a title that used pretty girls to mask a very challenging and clever table.

The center of the playfield consists of nine bumpers in a criss-cross pattern, spelling SLICK CHICK; hitting the letters in order lights them up, and completing the title lights one of the five rollover buttons. Get all five buttons, then shoot the center gobble hole for 100 points and a Special — but if the player shoots it too soon, he gets nothing except a drained ball. The target-packed playfield and the love/hate relationship with the center hole combined to create a game that walked the fine line between fun and frustration, a simple but addictive game that required precise skills from players.

Slick Chick proved to be one of Gottlieb's best sellers, with over 4,500 tables made. It was a longtime favorite of company president Dave Gottlieb himself, and its gameplay has been Vindicated by History: It can still be found regularly at pinball conventions, and commands huge prices from collectors.

A digital version is available on Microsoft Pinball Arcade.