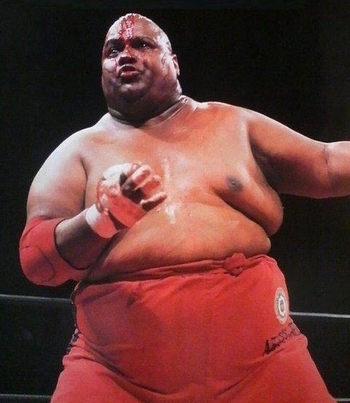 "The Madman from the Sudan."
Advertisement:

Lawrence Robert Shreve (born January 11, 1941), aka Abdullah the Butcher, is one of the biggest legends in Professional Wrestling history. Starting his career in his native Ontario in 1958, he became one of the true pioneers of hardcore wrestling.

A huge star in places like Japan, Mexico and Puerto Rico, he wrestled for All Japan Pro Wrestling, New Japan Pro-Wrestling, The UWA (Mexico), WCW, ECW, the American Wrestling Association, Stampede Wrestling, Juggalo Championship Wrestling, Dino Bravo and Gino Brito's "Lutte Internationale" in Montreal, the Von Erichs' World Class Championship Wrestling in Dallas, the World Wrestling Council in Puerto Rico, Ring of Honor, Dragon Gate, Fighting Opera HUSTLE, and so many more. He traveled a lot over his career, mainly to keep his act from getting stale; it mainly consisted of him stabbing his opponent bloody with a fork, with other weapons used as well, brawling through the arena, and eventually pinning his opponent with his finisher. A major draw all over the world for decades, he and Dan Spivey faced Bruiser Brody and Carlos Colon in Brody's last-ever match, on July 15, 1988.

Among his achievements, he is a former All Japan Pro Wrestling PWF Heavyweight Champion

"Mad Tropes from the Sudan":