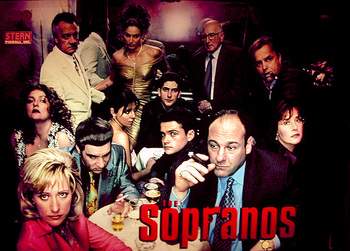 The Sopranos is a Licensed Pinball Table based on the popular HBO television series. It was designed by George Gomez and released by Stern Pinball in 2005.

The game takes players through the first five seasons of the show, and the player's objective is to become the Boss. This is accomplished by completing various tasks, such as cracking the Safe, finishing the Food, burying bodies in the Meadowlands, and getting the Super Jackpot from Tony's yacht. Collect money envelopes and pay tribute, burn down Artie Bucco's restaurant, find the hidden bugs in Tony's office, make a Truck Heist, then unwind with a Party at the Bing. This is accompanied by ongoing chatter from Tony, Carmela, Uncle Junior, Silvio, Dr. Melfi, Big Pussy, and Tony's talking Fish.