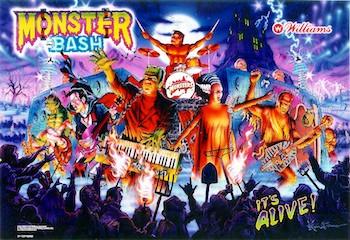 "You have the reason / You have the right / To mosh with the monsters / and stage dive tonight!"
Dracula: Ah, the creatures of the night. Vhat music they make.
Advertisement:

Monster Bash is a 1998 Physical Pinball Table designed by George Gomez and illustrated by Kevin O'Connor and was the last conventional table released under the Williams label before the switchover to the ill-fated Pinball 2000 format. note  The final conventional table, Cactus Canyon, would be released under the Bally label. This would also technically make it the last complete table, as Cactus Canyon was released in an incomplete state.

The goal of the game is to get together the Monsters of Rock, a band made up of six Universal Horror creatures: Count Dracula (guitar), the Mummy (bass), Frankenstein's Monster (keyboard), the Bride of Frankenstein (vocals), the Wolf Man (drums), and the Creature from the Black Lagoon (a.k.a. Gill; saxophone). Travel the globe to gather the various monsters, help them get their assorted instruments, then put on the show of the centuries. Activate the Phantom Flip and let the the game make shots for you, then run through all seven tracks on the CD while the mob works itself into a riot.

Monster Bash was only a modest success for Williams, but is frequently praised by pinheads for being an overlooked classic. The gameplay is approachable for beginners while being deep enough for experts, the playfield is loaded with fun gimmicks, the beautiful graphics, rocking music, and funny sound effects keep players engaged, and the lighthearted theme makes it suitable for any location.

A digital version of this table was available on FarSight Studios' The Pinball Arcade before their license to all Williams and Bally tables expired on July 1, 2018. It later reappeared in Pinball FX 3 on October 29, 2019.

Bride of Frankenstein: "Somebody stop me!"