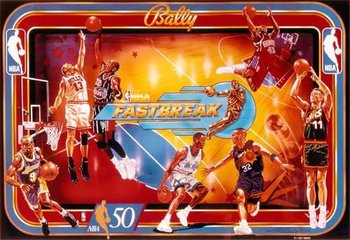 Only Bally can put the NBA spin on pin.
Advertisement:

NBA Fastbreak is a pinball machine released in 1997 by Williams Electronics (under its Bally label).

Designed by George Gomez, the game casts the player in the role of one of the NBA's then-29 teams, playing off against another on the court. The ultimate goal is to complete six tasks (ranging from activating every multiball to merely scoring 20 points) to win a trophy, then engage in Trophy Multiball for a shot at winning a championship ring for your team. Unsurprisingly, getting to this point heavily revolves around a plastic facsimile of a basketball hoop on the playfield. The player can shoot the ball into it from a ramp or pass it to one of four holes surrounding it (though they need to contend with a defensive player aiming to block the shot). Other features of note include a flipper, ball, and basket contained within the backglass (which can be used to rack up quite a few points when activated), high scores that are divided by teams, and the ability to link two machines together for a unique timed multiplayer mode.

Notably, the scoring system strives to emulate actual basketball - shooting the basket provides just as many points as it does in the real sport, eschewing the medium's usual inflation in the process. (To that end, there's no bonus earned after draining a ball, either.) The game's unique features, clear audio, and general design have earned it acclaim from pinball fans, though it is usually not considered one of the best Williams or Bally has to offer.

Not to be confused with NBA, a Stern Pinball game from 2009 (or Space Jam, released a year before Fastbreak).