Call a Hit Point a "Smeerp" 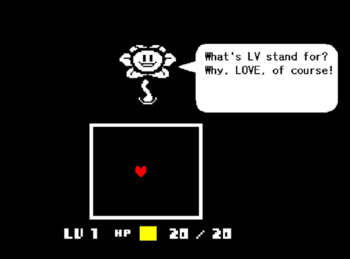 "You gained a love" doesn't quite roll off the tongue in the same way, unfortunately.
Advertisement:

As we all know, there are many conventions of video games, like Hit Points, extra lives, high scores, money systems, Energy Points, respawning, loot collection, and so on, which are almost universal.

Some games, however, try to avoid some of these conventions because they don't fit in with the genre. For example, superheroes don't usually collect loot or use expendable items like healing potions, realistic characters don't function normally up until the brink of death and then suddenly die, resurrection doesn't exist in all settings, and lots of character types wouldn't use money to buy items. But what if the genre of game calls for something like that, or the designers want or need such a mechanic for balance?

One way to handle the issue is to keep the errant mechanic, but offer a simple (or not-so-simple) "fluff" explanation. Superheroes might collect "flashbacks" or "trophies" from defeated supervillains that act like standard loot; realistic characters might have "Fatigue" or "Vitality" that represents near-misses or luck; and death can be smoothed over as "unconsciousness," with resurrected characters brought back to their feet by slightly more realistic restoratives.

Be careful when employing this trope in your games. Using tasteful quantities of proprietary terminology can give the game a unique flavor that stands out, but overusing it can cause players to have to constantly refer to a guide just to figure out what all of your unique terms mean.

This trope has been around since the days of Dungeons and Dragons, usually by game systems switching up their terminology just to be not-Dungeons-and-Dragons.

Named after the trope Call a Rabbit a "Smeerp", which is when an in-universe concept has a silly name.