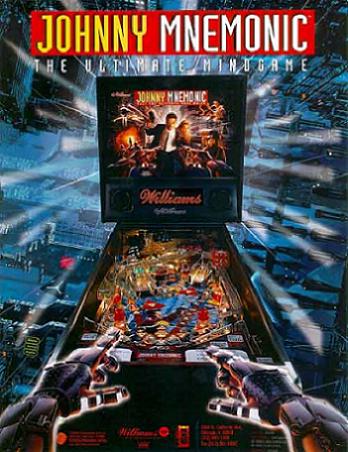 Johnny Mnemonic is a 1995 pinball machine based off the movie of the same name, created by George Gomez and Williams Electronics, with artwork by John Youssi.

The pinball follows the plot of the movie fairly well; you must accomplish various tasks, such as finding a cure for NAS, getting rid of the Yakuza, and getting various rewards from the Matrix.

Perhaps the most interesting thing about the game is its main toy - a magnetic glove that captures balls and must be steered over to the Matrix in order to drop the ball and get a reward.

The game is generally held in higher regard than the movie it's based on, with its nice art and gameplay, though it is infamous for being very lax with the scoring, with scores sometimes reaching in the hundreds of billions.