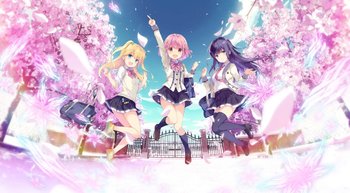 The game's three protagonists.note Left to right: Yuzu Fujisawa, Akari Hoshizaki, Aoi Misumi
O.N.G.E.K.I. (オンゲキ) is a Rhythm Game with Bullet Hell elements for arcades in Japan only, published and developed by SEGA, using their ALL.Net infrastructure for network features. It was originally released in 2018, as the third game to be released in SEGA's Performai series, after maimai and CHUNITHM.
Advertisement:

The core gameplay features a panel with two sets of three face buttons, with one set on the left and the other on the right, a large analog joystick in the center that can be moved horizontally, and two buttons on the inner walls of the cabinet. The player controls a party of three on a "hallway" perspective as they scroll down the chart. Upon reaching red, green, and blue notes, the player must hit the corresponding color of button (doesn't matter which side of buttons you hit, at least until a certain point in the difficulty scale). Likewise, there will be purple notes on the edges of the lanes; these must be hit with the correct button. Finally, the player uses the stick to move their team, in order to collect yellow Bell items for bonus points and health, avoid pink and purple bullets that will damage the lifebar when hit, and keep their team on the lanes whenever they narrow and twist, because if the player goes off-course, they will be unable to hit any notes until they get back on-track.

In addition to all of this, each song has an associated enemy you face off against. You start off defeating Mooks called Ongeki Nekos, and then partway through the song, the boss character of the song appears. Hitting notes will deal damage to the current enemy character in proportion to how accurate the note was hit and the strength of the player's team. If the player runs out of health, the song ends prematurely and they lose. If they deplete an Ongeki Neko's health, another one will take their place, and if they defeat the boss, provided the player doesn't fail out too along the way, the player wins. Otherwise, the song ends in a draw. Playing songs will level up the team members' affection and experience levels, allowing them to stand better chances against tougher enemy characters.

Unlike other arcade rhythm games, which typically give the player a fixed number of songs per credit, this game uses a GP system. Inserting credits adds GP and inserting multiple credits may grant the player bonus GP (in addition to the amount of GP the player naturally gets from each individual credit), depending on operator settings. Playing a song uses up a set amount of GP, as does extending the pre-song menu timer. After every song, the player can choose to keep going provided they have enough GP for another song or the money to buy-in extra GP, or end their session and convert unused GP into Money, a currency used for various features.

The game also has a companion cabinet, the Card Maker, which is where players can attempt to roll for new character cards of varying rarity and power, as well as print physical versions of their cards. The Card Maker also has some functions for CHUNITHM and maimai.

For those in Japan looking to play this game, but are hopeless with reading Japanese, Otogamer.com has a handy guide

ARE YOU READY? Let's SHOOT!