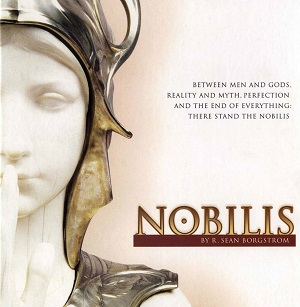 The revered 2nd edition Great White Book
"There are some things which you cannot do. There are some limits on even a Noble's actions. Never learn these limits. Never accept them. You are a Lord or Lady of this earth."
Advertisement:

Created by Jenna Katerin Moran (formerly Rebecca Sean Borgstrom), also creator of Hitherby Dragons, Nobilis takes the standard Tabletop RPG and turns it up to 11: your character is an Anthropomorphic Personification of any concept, from Clocks to Lies, with enough power from the very beginning to conquer a nation, move the stars in their alignments, or even destroy the world... not that destroying the world is generally very useful.

In order of cosmic significance, the game involves:

All of the above fight the Excrucians, mysterious, beautiful beings from beyond the Weirding Wall, who would like to nullify everything, bit by bit. (They have already destroyed some Estates.)

They come in four types:

The scope of Nobilis adventures is similarly epic in scale: in the few sample adventures in the second edition book alone, the party must defeat an invulnerable giant (this is merely a side encounter), arrange a party attended by other Nobles, help to resolve a centuries-old dispute (or stay out of the way as the involved parties "resolve" it themselves), unravel vast intrigue, kill the evil Santa Claus, and navigate the realm of dreams, or do a thousand other seemingly impossible things, which in a different game might form the basis for an entire campaign.

The true point of Nobilis, however, is not the scale of the action, but the meaning of it: the Player Characters (and most of their allies and enemies) draw their power from a single aspect of reality, so the most powerful way to attack them is to weaken that aspect. Doing so allows you to steal the target's Miracle Points, and even cause them physical harm — a difficult task, in a world where your foe might prove to be literally immortal. Such interactions might happen unintentionally as well: when the Power of Addiction acts against the Power of Strife, the ramifications may be far longer-reaching for the Drug War, or the progress of Alcoholics Anonymous.

Adding structure to this inconceivably vast world are the Imperators, even more powerful gods who invest a portion of their power to create Nobles. They run the spectrum from The Professor to Trickster Mentor to Evil Overlord, and are used both to enable plots and to drive home the vastness of the universe. They are not omnipotent either, however, and can be defeated even by a starting group of characters if they cooperate effectively.

The books are full of short snippets of text written (primarily) by Moran, in a style similar to that of her fiction blog Hitherby Dragons, giving further detail and flavour to the world in which Nobilis takes place, which include such passages as:

The stone was heavy as my sins. That's not a metaphor, at least, not exactly. That's how heavy my Lady, the Marchessa, made it.

Equal parts The Sandman and the later, weirder volumes of His Dark Materials, Nobilis has attracted a tight-knit cult following that apparently like to make long and overly poetic descriptions of it whenever possible.

The first edition (nicknamed the Little Pink Book, or LPB) was put out by Pharos Press. A revised and expanded version (the Great White Book, or GWB. Not to be confused with that GWB) was released by Hogshead Publishing. The third edition corebook, Field Guide to the Powers (tentatively dubbed the Fully Colored Book), was released by Eos Press. Both the GWB and Field Guide are available as PDFs.

2e had a print supplement, The Game of Powers, and two PDF 'peculiar books', Unlikely Flowerings and Creatures, Clothed in Strangeness. 3e has the PDF supplement Antithesis, Minibook 1i: A Diary of Deceivers and the freely available The Story Of Treasure, which is basically designer's notes and elucidation on the fiddliest of stats.

, written by Moran with art by Miranda Harrell, featuring the adventures of a group of chibi Excrucians.

A spinoff project has been started called Chuubo's Marvelous Wish-Granting Engine, comprising both novels and RPG sourcebooks. It shares a number of ideas with core Nobilis, but has different mechanics, cosmology and setting.

Another spinoff is Glitch, an RPG about the rare few Strategists who've opted out and stopped actively destroying Creation. It doesn't mean they've changed sides (although that's an option), just that they're no longer pursuing Creation's destruction.