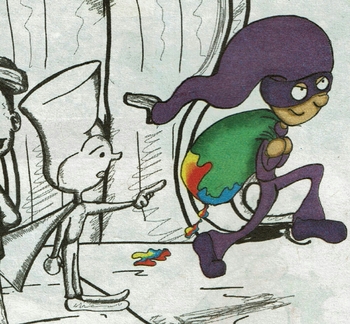 As a way to prove one's thieving credentials, the best Impossible Theft is to steal something metaphysical.

Stealing a name, so that it cannot be spoken. Stealing a reflection from a mirror, so it only reflects the room you're in. Stealing the scent of every rose, as a Valentine's day gift. These thefts are an attempt to steal from the physical laws of the universe.

It may be considered the inverse to the Sister Trope, Monumental Theft. While a monumental theft describes stealing the moon, it doesn't always deal with the ramifications of gravity on Earth. An Intangible Theft of the moon's gravity would certainly cause tidal problems here on Earth, even if the moon doesn't move. Both tropes are a type of Impossible Theft.

See also Insubstantial Ingredients, where the ingredients collected are as metaphysical as the items stolen here. They might even overlap! Abstract Eater can ingest what would otherwise be stolen. This is a Super-Trope to Power Parasite, where one character can take away the abilities of other characters and use those power(s) for themselves.

Invasion of the Word Snatchers

Illitera steals all the words from the planet Earth.

Invasion of the Word Snatchers

Illitera steals all the words from the planet Earth.