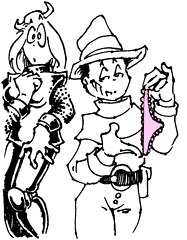 "The soulful tunes of this accordion inspire you to new heights of thievery you never thought possible. Forget the Mona Lisa, you've got your eye on the Sistine Chapel ceiling."
— Kingdom of Loathing, description of Squeezebox of the Ages

The ultimate climax of any thief story is to steal something that cannot be stolen. Some thefts are more impossible than others, of course, and thieves that commit impossible thefts incidentally are usually more impressive than thieves who need to build up to a less impossible theft, but any sort of thief vs. thief conflict will usually prove the need to escalate the difficulty to impossible levels.

Leave the objective in a timelocked diamond-hard safe underground in a room filled with lava past a pit of crocodiles and it will be gone in the morning. Should they choose to, they could steal your underwear (while you're wearing them!) without you noticing anything, or they could steal a jewel from in front of a dozen attentive guards without any of them seeing it go.

If the theft was a climax of the story, then there's often an Unfolding Plan Montage to describe how it was done and what happens next. Otherwise, the explanation is more of a Noodle Incident, and the character is just that good.

While this can be done by any thief, a Phantom Thief is most common, with Classy Cat-Burglar and Gentleman Thief not far behind. The Caper may also have an impossible target, but a large enough crew can reduce how "impossible" the theft seems to be. If video game mechanics allow the player's character to steal ridiculous things or under ridiculous circumstances, see Video Game Stealing. Ridiculous Repossession is when these items are repossessed instead of stolen.