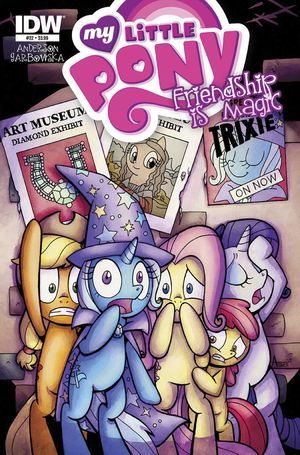 It was Trixie, in the Museum, with her Horn!

Story by Ted Anderson, Art by Agnes Garbowska and Bill Forster (Ted has provided annotations for this arc

Applejack, Apple Bloom, Fluttershy, and Rarity have been invited by the Great and Powerful Trixie to one of her magic shows in Manehattan, and they invite Babs Seed along as well. At the show, Trixie does an escape trick involving the valuable Ostlerheimer Diamond, but by the end of the trick, the diamond has gone missing. The theater is quickly blockaded by police. The Ponyville group are surprised that Trixie has actually been working with the police to try to capture the notorious thief Rough Diamond, who has been performing a series of gem thefts in the city. Trixie reveals that the diamond that she had used in the show was a fake, with a magical tracking device hidden on it, but they are surprised to find the fake hidden in Applejack's hat. Confused, Trixie and the others go with the police to the theater office, where the real Ostlerheimer Diamond was stored and, after a smoke bomb hidden in the safe goes off, finds the diamond missing. The police chief reveals that he too put a tracking device on the real diamond, and when one of his sergeants track down the magic, they find the diamond on Trixie. The entire group is put under suspicion, but Trixie grabs the others and escapes.

After ditching the real Ostlerheimer Diamond, the group make for Babs Seed's home to hide out and figure out their next steps. They agree that they must try to catch Rough Diamond and clear Trixie's name, with several of the ponies that were helping Trixie's show as possible suspects. However, they have no idea as to the thief's next target until Babs notices a scrap of paper stuck in Trixie's mane, part of a map of the city highlighting the Manehattan Museum of Art. Applejack vows they will catch the thief there and clear Trixie's name.

The group dons disguises to split up; Fluttershy and Apple Bloom check out the museum to find that the next target of Rough Diamond is the Forehoof Pendant, while the others visit various jewelry stories to discover one where Rough Diamond pawned off her stolen wares, with the shopkeeper only being able to recall having seen a bit of her cutie mark, a diamond. Regrouping, they agree they need to try to catch Rough Diamond in the act and they sneak into the museum that night. They spot the masked Rough Diamond in the midst of the act but she creates a distraction, and before the others know it, Rough Diamond has disappeared and the police have captured the group. Babs catches something odd about one of the arresting officers, Officer Fluffles, and creates a distraction while ordering Trixie to capture her. Babs realizes that the theft of the Ostlerheimer Diamond could have only be done by someone on the inside, including any of the police, and points out that Fluffles' cutie mark is oddly-shaped - when she wipes it away, it reveals the diamond, proving Fluffles is really Rough Diamond. Rough Diamond is apprehended, and the police are able to recover all the missing gems. Trixie is exonerated and thanks Babs for giving her a second chance, and she returns to the stage the next night to finish off her show proper.