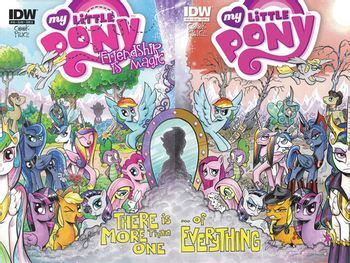 This about sums it up.
Advertisement:

The Mane 6 are summoned to Canterlot by Princess Luna, who reveals Princess Celestia has been missing for a week and Luna has been masking her disappearance since. Luna reveals she saw Celestia step into a magic mirror not unlike the one Twilight used (from My Little Pony: Equestria Girls), but cannot figure out its magic. She tasks the Mane 6 to find Star Swirl the Bearded's personal library deep below Canterlot, where she remembers that Celestia had spent much of her time learning from him in her youth, while she and Spike maintain order in Equestria.

The girls find the laboratory and start studying his notes. They learn that hundreds of years ago, Celestia and Star Swirl had discovered the mirror could be opened onto countless dimensions, and together they enjoyed studying the other parallel worlds, even bringing some of the technology advancements back for study in Equestria. One world Celestia became attached to, but Star Swirl expressly forbade her from visiting it or "him" again, and cast a spell to prevent Celestia from opening the mirror. Armed with this information, the Mane 6 return to Canterlot. Just as they try to work out how to follow her, a battered Celestia jumps out of the mirror and falls unconscious, the image of King Sombra briefly appearing before the portal closes.

As the others help Celestia tend to her wounds, she explains that in that universe, King Sombra is both her ally and a close friend, and Sombra needs the help of the Mane 6 (and Spike) and the Elements of Harmony to protect his kingdom there. Twilight gets a quick briefing on how to reactivate the portal from the other side and to use Spike for relaying messages to Celestia, and the Mane 6 and Spike step through, finding themselves in a version of Canterlot that has seen much better days. Though briefly captured by Sombra's guards due to mistaking the group for the alternate universe's version of them, they find themselves face to face with a very sane, sensible, and gentlecolt-ly (and rather dashing) Sombra, who thanks them for coming and apologizes for the guards. Before he can explain the situation, the alternate versions of Celestia and Luna arrive - Sombra's tormentors. The mares start to get into a fight with the two evil alicorns, but suddenly Spike coughs up a scroll and Sombra uses a force field to separate the Mane 6. The scroll, from the good Celestia, reveals that any damage done to the evil versions of Celestia and Luna will also harm the good versions, a side effect from the length of time that Celestia had spent in this universe that created a possible paradox according to Star Swirl's notes. As the evil alicorns fly off in laughter, Sombra reveals that he and the good Celestia love one another, shocking the others.

The good Sombra explains that Celestia and Star Swirl visited him long agonote Based on other clues in the text, before the sisters had met their version of Sombra, and before Luna had turned into Nightmare Moon. We also know they are aware of who Discord is from their side, given their gawking reactions to "Captain Goodguy", so this may be after they turned him to stone the first time. via the mirror. Both Sombra and Star Swirl were fascinated with the other's world while Sombra and Celesta fell in love at first sight. Sombra and, at the time, a kind Luna, helped to show their visitors around and provided them with goods to take back, extending the offer for them to visit any time they can in the future. Though they would continue their visits, with Sombra and Celestia's love growing, Star Swirl discovered that their two world started to become too interconnected, and limited Celestia's visits to it more and more. Eventually, this led to Star Swirl forbidding Celestia from using the mirror as previously seen, and creating an irreparable rift between Celestia and Star Swirl. Undaunted, Celestia would look for a way to break the spell on the mirror behind Star Swirl's back.

Sombra then explains that he knows the evil version of Celestia has been trying to acquire the magic to to open the mirror from his side, offering Sombra a deal to banish the good Celestia to Sombra's world so they can be together and would leave that world at peace. Sombra has refused, not wishing the fate of his world on the main one. Twilight suggests that the same way they were able to stop their version of Sombra, with crystals, would work similarly well against the two evil sisters. The Mane 6 and Spike make plans to travel to the Castle of the Two Sisters to implement their idea, unaware that evil Luna has overheard everything to prepare her sister for the oncoming battle.

As Sombra and the Mane 7 travel to Evil Celestia's castle they notice the sky becoming ominous, a sign of the weakening of the paradox between the two worlds. When they reach the castle, Evil Celestia begins her second plan - she turns on her own sister and blasts her with full force, knowing full well this will cause the same physical harm to Luna in the prime world and assure Celestia will be by her side. Luna is thrown at the magic mirror, shattering it and causing the barriers between the two worlds to merge, bringing the good versions of Celestia and Luna to this world. Good Celestia refuses to allow her evil self to continue this and begins to use the full force of her magic to fight her. The distraction allows the Mane 6 to trap the two in separate bubbles, and for Sombra to start to encase the evil Celestia in a crystal shell; the realize too late that this is also doing the same to Celestia.

Good Celestia insists that Sombra and the Mane 6 continue the spell, but Sombra refuses to let this end. Realizing that he must restore balance between the two worlds and knowing the fate of his alternate self, he takes the power of the Elements of Harmony and uses that to drain Evil Celestia and Luna of their dark ways and absorbs it himself, taking on the appearance of the villainous King Sombra, bringing the balance from the prime world to this one. With the Celestias released from the shells, prime Celestia spends a brief farewell with Sombra before he loses his rational side and flies off. The walls of realities between the two universe begins to repair itself, with the formerly evil Celestia and Luna back to their good selves and ruling over a much kinder world. A portal opens long enough for the Mane 7 and the Princesses to escape back to their world. Back in prime Equestria, the Mane 7 help Celestia to clean up the broken mirror, Celestia keeping one piece of it to remember her Sombra by.