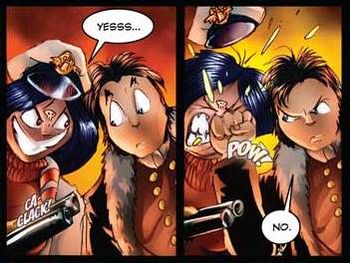 "This city is afraid of me. I have seen its true face. The streets are extended gutters and the gutters are full of blood and when the drains finally scab over, all the vermin will drown. The accumulated filth of all their sex and murder will foam up about their waists and all the whores and politicians will look up and shout 'Save us!' ...and I'll look down and whisper 'No.'"
— Rorschach's Journal, October 12, 1985, Watchmen
Advertisement:

The polar opposite of Big "NO!". The Little "No" is a "no" that is very soft-spoken, yet extremely powerful and defiant. A character who uses it is indicating complete certainty. They do not view whatever is happening in front of them as any sort of serious threat or challenge. It is a threat to be swatted like a fly, or a plea to be dismissed like the trash, an expectation of submission that is met with absolute refusal. May be used as an Armor-Piercing Response.

An alternative use of the Little "No" is used by characters who aren't quite as badass as the first type who have just realized something really bad is about to happen, and say a soft 'no', their voice being a single syllable of clarity right before something blows up.

Third use, and the little brother of the Big "NO!": a tiny, pathetic "No", almost as if begging for the reality in front of the speaker's eyes to not be real. Disbelief and denial, with a blank or horrified look on their own face. When being hammed up, this little "No" will often be followed by the usual hysterics and a resounding Big "NO!". Done effectively, conveys utter and complete vulnerability from characters who are too badass to break down weeping and screaming. The Stoic will be the one to use this "No", in a moment of Not So Stoic. Also found in the midst of many a Tranquil Fury, or at the beginning of a Rapid-Fire "No!".

A subtrope of Dramatic Deadpan. Compare Blunt "No", Stage Whisper or Blunt "Yes". Compare and contrast the Precision F-Strike — for a character who swears a lot, this can have the same effect.

Freeza Learns About His Killer

Loosing a dodgeball game was bad enough for Freeza, but a whole new can of worms opened up when Cell smugly reveals who it was that killed him... or rather who the killer's father is.

Freeza Learns About His Killer

Loosing a dodgeball game was bad enough for Freeza, but a whole new can of worms opened up when Cell smugly reveals who it was that killed him... or rather who the killer's father is.