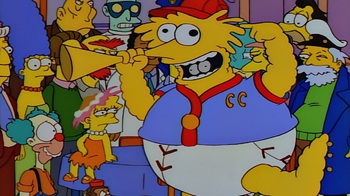 The One With… Steamed Hams.

While spitting on cars from a bridge, Milhouse and Bart begin to wonder if anything interesting ever happens to the people of Springfield — and soon the episode shifts into several vignettes about the lives of everyone in town, from Apu leaving work to go to a party to Lisa getting gum in her hair to several "wacky sitcom" style set pieces (Principal Skinner and Superintendent Chalmers having lunch and Cletus the Slack-Jawed Yokel getting boots for Brandine) to Milhouse desperately searching for a bathroom to Nelson learning a lesson about laughing at others.

Agnes: Seymour! The TV Tropes Wiki is on fire!
Skinner: No, Mother, it's just the Red Links.
Chalmers: Well Seymour, you are an odd fellow, but I must say: You steam a good trope.
(As Chalmers leaves down the Information Superhighway, flames can be seen within every wiki article.)
Agnes: Help! Help!
(Chalmers turns. Skinner smiles and gives him a big thumbs-up. Chalmers finally disappears, and Skinner races back into the website.)
Feedback