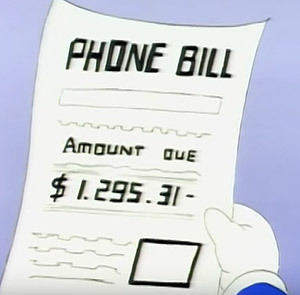 "Remember the trouble we got into at that Speak to Santa Hotline back in Brooklyn?"
"He had been extremely relieved when their mother, horrified by the huge bill she had suddenly received from the Rat Office, had canceled the job."
— Septimus Heap (describing a Message Rat)

A character gets the bill for a service they used and is shocked by the price on it. This is usually due to hidden or undisclosed fees that were added on by the unscrupulous merchant. It can also be due to a clueless character ordering expensive services without realizing the cost. This presents a conundrum for them as the character doesn't have the means to pay the outstanding balance.

The bill is often related to room service, restaurants, credit cards, medical services and, recently, cell phones. It's almost an Obligatory Joke in an episode where a hospital is essential to the plot.

A less comical example is a form of extortion racket where the business presenting the bill is crooked and has enough "legitimacy" or connections to get away with it. Anyone who refuses to pay the bill is free to "discuss" it in the back with the large burly men.

This may overlap with Undisclosed Funds if the exact amount of the bill is never shown. This trope also includes reactions to looking at the price tag. There is almost always a random number of cents in the price.

Luigi tells Mario about the time they got into trouble with the "Speak to Santa hotline" in Brooklyn, where they racked up a bill of $1,295.31.

Luigi tells Mario about the time they got into trouble with the "Speak to Santa hotline" in Brooklyn, where they racked up a bill of $1,295.31.