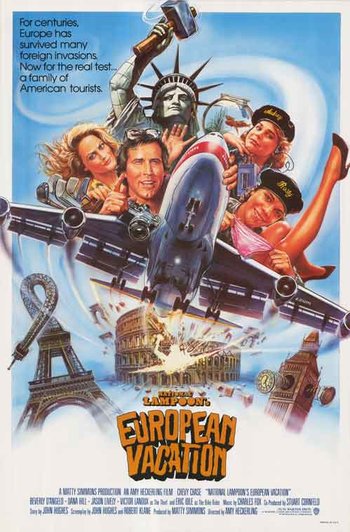 "Oh the hills are alive with the sound of Griswald..."'
— Clark W. Griswald in an Imagine Spot
Advertisement:

National Lampoon's European Vacation is a 1985 comedy movie that serves as a direct sequel to National Lampoon's Vacation. Chevy Chase and Beverly D'Angelo reprise their respective roles as Clark and Ellen Griswald, while Dana Hill and Jason Lively assume the roles of the Griswald children.

After the Griswald family accidentally wins a European vacation courtesy of the popular game show Pig in a Poke, Clark drags them out of the house once again to see as many sights as possible in the iconic locations of London, Stonehenge, Paris, Germany, and Rome.