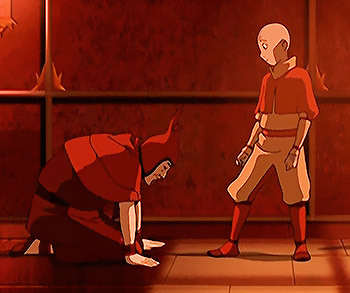 When things just get too much, when you're totally defeated, shaken to your core, and at a loss for how to cope, sometimes, there's only one thing you can do.
Advertisement:

Drop to your knees. Fall forward with arms outstretched, bow your head, and curse cruel fate. Sometimes called OTL, orz,note no relation to the Orz or STO because the shape of the letters approximates this folding of the body.

If things are particularly bad, or the favor is particularly big, the supplicant will touch their forehead to the ground in a full kowtow. If played for laughs this is usually done in a Corner of Woe, Color Failure optional.

If this is towards an antagonist who still won't grant the humble person a favor, it's a good sign that they're a complete Jerkass who will be zapped by Laser-Guided Karma later. And if a hero rejects helping the supplicant, expect them to be chewed out by the rest of the cast. Compare Kneel Before Zod, Knee Fold Fall of Defeat, Ain't Too Proud to Beg. See also Cower Power.

Note for Anime/Manga fans: This is called "dogeza (土下座)" in Japanese, and is often used in works as a sign of complete humiliation (either humiliation forced upon someone by making them do it, or humiliation received by a character willing to accept it as their just due, or as a price to pay for a failure). However, it is used without this context (as more a sign of respect than humiliation) in various formal ceremonies (religious, political, even sports), as well as when beseeching various favors as a supplicant to someone higher on the social ladder.