Manga / I Married My Best Friend to Shut My Parents Up 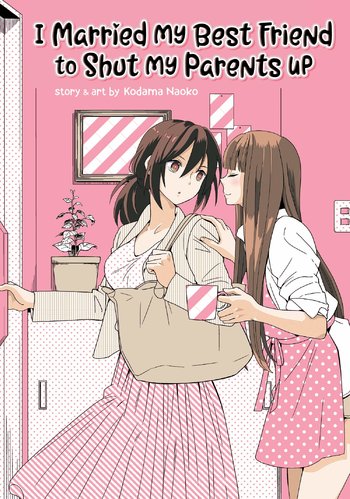 I Married My Best Friend To Shut My Parents Up is a Yuri Genre manga by Kodama Naoko.

Machi Morimoto is a young professional woman who's grown tired of her parents pressuring her to marry a man of their choosing, knowing that they're only doing it so they can brag about their son-in-law. Enter her friend and former kohai, Hana Agaya, who needs a place to stay while her apartment building's being renovated, and convinces Machi to fake a marriage with her as a way to solve both their problems. But there's a catch: while Machi is straight, Hana is gay, and both are aware that Hana was interested in her romantically back in school. Machi has to figure out how to deal with this new "relationship", as well as navigate her possibly changing feelings toward her "wife".

The manga lasts three chapters and is contained in a single volume, along with an unrelated one-shot, Anaerobic Love, and a short denouement titled "Fake the first word is crossed out with an X that doesn't really work on the formatting this wiki has Married Life".