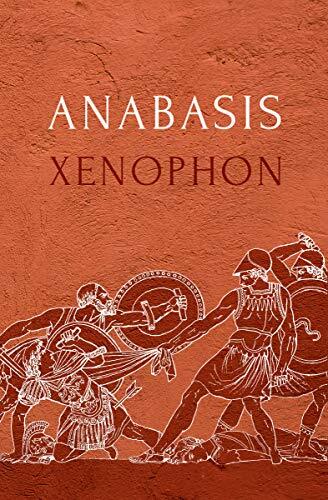 The Anabasis (also called The Anabasis of Cyrus, The March Up Country, The March of the Ten Thousand, and The Persian Expedition) is a work by the ancient Greek writer Xenophon. It details the journey of 10,000 Greek mercenaries in the army of Cyrus the Younger as he seeks to overthrow his older brother, the King of Persia Artaxerxes II. They fight Artaxerxes' army at Cunaxa, defeating it, and all seems well...

Until they realize that Cyrus had been killed in battle, leaving the Ten Thousand deep in the Persian Empire—whose king they had just fought to overthrow—with few or no friends and a long way to go before they could find anything even remotely resembling safety.

There begins the real story, as the Ten Thousand battle the elements, Persian treachery, and their own fears—encountering some interesting people along the way—as they try to make their way back to Greece.

A classic of Western literature, and frequently the first full original text a student of Ancient Greek will read, on account of the exciting, action-packed plot and Xenophon's clear, energetic writing style (rather like Caesar's Commentaries on the Gallic War for Latin students). Classics professors often joke (or half-joke) that this is the book that Hollywood should make a movie of. And they have—sort of: The Warriors is a Setting Update of the Anabasis, with numerous embellishments and edits. There also exists a Low Fantasy novelization, The Ten Thousand, by Paul Kearney.

You can read the original work here

. If that's all Greek to you (sorry), you might want to check out this English translation

Tropes found in the Anabasis include: