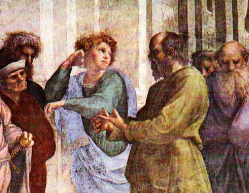 Come hither, Meletus, and let me ask a question of you.
"I will begin at the beginning, and ask what the accusation is which has given rise to this slander of me, and which has encouraged Meletus to proceed against me. What do the slanderers say? (...) 'Socrates is an evil-doer, and a curious person, who searches into things under the earth and in heaven, and he makes the worse appear the better cause; and he teaches the aforesaid doctrines to others.'"
Advertisement:

One of Plato's dialogues, the Apology (like all works by Plato) takes place in Greece in the 5th century BC, being written a little bit later. It describes the famous trial of Socrates, performed in Athens after he was accused of blasphemy and corruption of youth. The degree in which it reflects the real event is debatable, but the trial must have had many witnesses (with Plato most probably being one of them), who could help establish the accurate version of all three speeches. Nonetheless, the dialogue is impressive by itself because of its literary value. Of all Plato's dialogues, this one is used as a translating exercise by the students of classical Greek most often, because it is relatively easy to read and very well-written (with numerous examples of famous Socratic irony) at the same time.

Apart from being one of the oldest examples of the Law Procedural genre in history, it is an important ethical work, discussing the significance of truth in ethics and the real meaning of death. Although, as with all dialogues written by Plato, it is debatable in what degree it describes the historical Socrates instead of being an Author Tract, it is usually acknowledged to be one of the earliest Plato's texts, which means there is a good chance that the Socrates from Apology expresses his own views (in the latter case it may be the case when Shaming the Mob did not work). The fact that other authors wrote accounts of Socrates' trial that largely agree with Plato lend evidence to the theory (although some, like Xenophon, may have relied in part on Plato, so there's some evidence pulling the other way). Some interpreters say that the dialogue, along with a few other Plato's works, foreshadows Christian ethics and eschatology.

The Apology of Socrates provides examples of the following tropes: