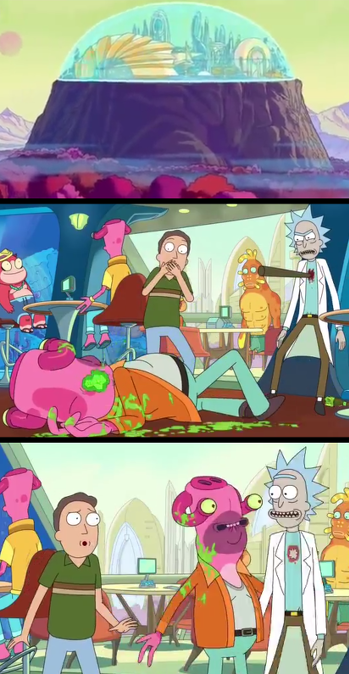 Welcome to Immortality Field Resort. A place where going out for drinks then killing each other does not necessarily occur ...In That Order.
"There's something funny about these woods... [p]eople who come here seem to have a lot of difficulty dying."
— Ranger Roy, Apeshit
Advertisement:

Simply put, it is a place that induces immortality. It varies as to what kind of Immortality it provides. At most, it could give you either Complete or Resurrective Immortality. At the least, it stops the aging or prolong the lives of those affected. Among other things, it could be The Shangri-La, a Pocket Dimension, a Place Beyond Time, an unassuming grassland, or a Cyberspace but the common ground is that as long as you stay within its Area of Effect (and the effect itself stays in place), you will not have to worry too much about dying. Just a place full of Immortals does not qualify here; they have to be immortal because they stay there.

This could potentially overlap with Sealed Evil in a Duel, if the inhabitants are not on good terms. If it only favors one side of a conflict, it also provides Home Field Advantage and if the favored side has a Domain Holder, they may be the real source of the immortality. If it's consciously not letting its occupants die, it's also a Genius Loci. If it's not letting them go even if they want to, it could lead to And I Must Scream. Leaving the place is also not an assurance of resumption of a mortal life as No Immortal Inertia may occur instead, but if they're lucky, its effects may take time to wane.

A sub-trope of Immortality Inducer and Place of Power.

Contrast with Soul Jar, which has to be well-hidden to continue benefiting from it and can work even when the beneficiary is far away, and Amulet of Dependency, if the Immortality Inducer has to stay on you. Compare with Geo Effects, which provide other varieties of boosts from being in a specific location, and Reinforce Field, which enhances objects' structural integrity. Also, see Human Popsicle and Sleeper Starship for anti-aging examples that require suspended animation or sleeping for a long time.

While Resurrection is a feature of both Respawn Point and Immortality Field, the latter has it only as one of its possible functions. Revival of Player Characters is a common feature of Video Games so unless immortality is noted to be caused by the setting, it is not an example.

The Trope Codifier. No Death, no Disease, no Dismemberment, no Heart-Attacks.

The Trope Codifier. No Death, no Disease, no Dismemberment, no Heart-Attacks.