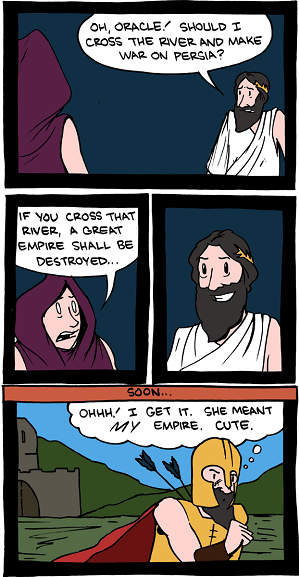 "And be these juggling fiends no more believed,
That palter with us in a double sense;
That keep the word of promise to our ear,
And break it to our hope."
— Macbeth, finally cottoning on, Macbeth, Act V scene viii
Advertisement:

Prophecies are funny things. They always come true (except when they don't), but they almost never mean what you thought they did.

It's even worse when you think you have them figured out.

Half the time they work much like a Literal Genie. A prophecy may seem to predict the death of a character, or of a set of characters, or The End of the World as We Know It, but then it turns out that there's some other reason for such-and-such to occur. (Like if a character "isn't coming back" from some sojourn to, say, The Future, they may survive, but then stay in the future.)

The other half are impossibly cryptic, often using incredibly flowery metaphors. "The sun will rise on Christmas Day" has an obvious literal interpretation, but the sun in question might actually be the Aztec god Huitzilopochtli, an H-bomb, or the British tabloid. It might, through standard symbolism, mean gold, or something golden, love in general or a particular pair of lovers. It could refer to Japan, Uruguay or the Jesuits, all of whom use a sun in their flag. It could be a person whose name means 'sun', such as Elanor, Eloise, Sol, Sorin... It could be any of a thousand things. And if it's spoken rather than written that opens up situations where the prophecy refers to a "son" rather than "the sun."

"Rise" has multiple meanings too, and there are several possible dates for Christmas. If the prophecy is said to be a translation, there's additional room for obscurity. Perhaps rise should be raise — the same word in some languages. Perhaps the real meaning involves bi- or trilingual puns, or Hittite idioms. The technical term for the little "twist" in such a prophecy (or any riddle, contract, etc) is "quibble" (although it's most commonly used for when the twist turns on legalistic nitpicking).

Ambiguous Syntax can be another technique: in "The duke yet lives who the king shall betray", will the king betray the duke, or the duke the king? And since most prophecies are spoken, there is always the possibility that it was simply misheard. Remember, when it comes to prophecy, homonyms are definitely not your friends. If the prophecy is old enough to have been recorded in a dead language, the original wording may also be forgotten, replaced by a less-clear translation — or in the worst-case scenario, multiple translations, at least two of which directly contradict each other.

In any case, the prophecies generally rely on a heaping dose of Double Meanings to give them their ambiguous nature.

Sometimes, of course, the most literal meaning is correct. Such an instance can still be a meta-Twist if the witnesses to the prophecy's proclamation suspect a twist.

Deciding what the prophecy actually meant, and whether it's literal or deeply cryptic, is then impossible until after it has happened, which is part of the mechanism of many Self Fulfilling Prophecies. It's because no one understood the real meaning that the attempts to avert it made it come true.

This is Older Than Feudalism; the "cryptic" prophecy was a staple of ancient Greek Mythology.

See also No Man of Woman Born, False Reassurance. For when the "real meaning" relies on an extremely dubious interpretation (beyond what a reasonable person would consider valid) of the original prophecy, see Metaphorically True. For when the vision looks like someone dying, but turns out to be a clone, robot, shapeshifter, identical twin, or other impostor, see Actually a Doombot, Doppelgänger, Twin Switch, Backup Twin. If the prophecy explicitly mentions multiple possibilities, but that only one of them will come true, it's an Either/Or Prophecy; here, the prophecy says that one thing WILL happen, and the question just comes down to what that thing means. Contrast Thread of Prophecy, Severed, Self-Defeating Prophecy, and Screw Destiny when the prophecy fails entirely.

Since the mere fact that there is a twist to a prophecy is often a spoiler, feel free to turn back at this point.