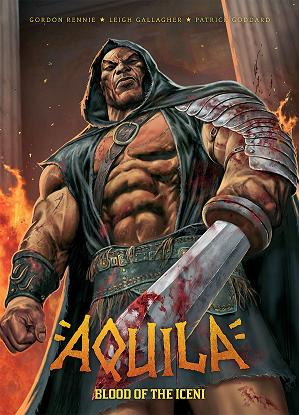 The man who became known as "Aquila" was a Roman gladiator from Nubia who joined the slave uprising of Spartacus before being crucified in 71 BC when the rebellion failed. After praying to the gods, his call is first answered by The Devourer, an Eldritch Abomination which feeds on the souls of the wicked. Aquila is resurrected by the Devourer and given superpowers so that he can walk the earth and bring more souls for her.

Loosely based on an earlier 2000 AD comic that also featured a Roman gladiator named Black Hawk, which was more sci-fi oriented.