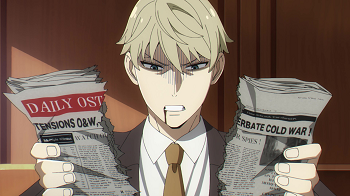 This trope describes a situation when a character destroys a piece of paper in either hot or cold anger.

When we get angry, furious, seething, exasperated, enraged, infuriated,... it feels so good to destroy something. Best if it is something that angered us in the first place. A character who gets angry with someone or because of something can furiously tear a piece of paper into little pieces, or crumple the paper out of anger to vent the frustration. The paper ball can be thrown away, the pieces can be tossed on the ground, or tossed into fire and burned for good.

However, characters can also destroy a piece of paper in 'cold anger', which means their action is calculated and well-thought out, and the person is actually in complete control of their emotions. For example, they might do so to show off their superiority and that they are on top of things, or to emphasise that the document is not worth any attention and can be disregarded.

The trope can come about in various scenarios. Writers suffering from the Writer's Block are likely to destroy their good-for-nothing drafts and vain attempts. Students obsessed with their marks may wreck their test marked A minus. Someone who's reading a bad news (for them) in a newspaper might tear it up afterward. Someone who got dumped or cheated on might destroy photos or letters from their (soon-to-be) ex. Characters working a Soul-Crushing Desk Job might crumple annoying reports and start playing Wastebasket Ball. Or the character can rip up an unfair contract, hoping to make it null and void. If the character is freakishly strong and absolutely furious, they might tear a whole book in half. If they can control fire, they might even burn it. Some might even eat the paper instead.

It can be a part of Anger Montage and it can be combined with its sister tropes like Agitated Item Stomping, Desk Sweep of Rage, Flipping the Table, Tantrum Throwing, Stab the Picture, and others. Percussive Therapy is the Supertrope of this (dealing with anger by hitting, kicking or destroying things). Break-Up Bonfire is a related trope when a character who recently broke up burns pictures and letters from their ex (or gifts and other mementos of the relationship).