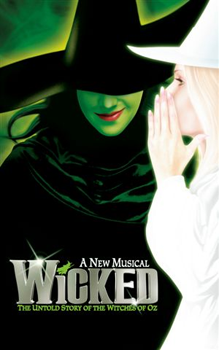 So much happened before Dorothy dropped in.
Oz Citizen: Glinda, why does wickedness happen?
Glinda: Well that's a good question, one that many find confusifying. Are people born wicked, or do they have wickedness thrust upon them?
Advertisement:

The Musical adaptation of Gregory Maguire's novel, based on The Wonderful Wizard of Oz.

Wicked is the story of Elphaba, a girl who was born with green skin after her mother had an encounter with a traveling stranger. Soon after, her mother died giving birth to Elphaba's wheelchair-bound sister, Nessarose, and Elphaba grows up as The Unfavorite and full of Survivor Guilt.

Once Elphaba and Nessarose are old enough to attend magical college at Shiz, Elphaba accidentally becomes roommates with the pretty, popular and entirely insufferable Galinda. The two girls instantly fall in loathing, but through a series of misunderstandings involving the rather shallow Prince Fiyero, they come to appreciate each other's perspectives. Slowly but surely, the two girls find common ground and end up becoming best friends.

Things change, however, when Doctor Dillamond, their Talking Animal teacher, is suddenly dismissed from his profession. Trying to discover where the nation's sudden bouts of racism stem from, Elphaba and Galinda — now going by Glinda — make the trip to Emerald City, to meet the Wonderful Wizard of Oz. However, thanks to a Love Dodecahedron involving Elphaba, Glinda, Fiyero, Nessarose, and a timid young munchkin man named Boq, things become a lot more complicated than they had counted on. And as the two girls find themselves sucked into the plot of The Wonderful Wizard of Oz, it becomes inevitable that one becomes the Good Witch of the South — and the other, the Wicked Witch of the West.

After going through a long period of Development Hell including multiple dropped release dates, a two-part film adaptation is in the works. Due to the importance of most songs to the narrative, it was decided to not cut anything out, with Adaptation Expansion expected. It is set to be directed by Jon M. Chu, with Cynthia Erivo as Elphaba and Ariana Grande as Glinda. The movies will be released on the Christmas Days of 2024 and 2025.

The Musical contains examples of the following tropes:

♫ Because I knew you
I have been changed for good ♫