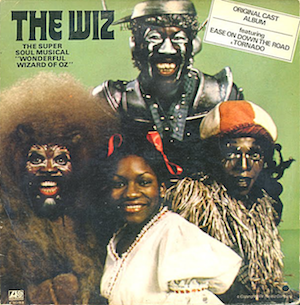 "C'mon, ease on down, ease on down the road!"
"He's the Wiz! He's the man,* "He's the one" in the NBC telecast he's the only one who could give your wish right to ya..."
Advertisement:

The Wiz is a pop musical version of The Wonderful Wizard of Oz (book by William F. Brown, songs mostly by Charlie Smalls) that originally opened on Broadway in 1975 and was the winner of the Best Musical Tony Award for the 1974-75 season. Although it has a noticeably funky score and is usually performed with an all-black cast, its plot hews closely to that of the original novel, including characters and details that the famous 1939 film left out or changed, including the Good Witch of the North, the Silver Slippers, etc. It is still frequently staged today.

Motown and Universal produced a movie adaptation in 1978; it was directed by Sidney Lumet and Joel Schumacher wrote the screenplay. This added a further, big twist to the Oz tale: Instead of turn-of-the-20th-century Kansas, the story begins in modern Harlem and Dorothy (played by Diana Ross) is a shy schoolteacher in her 20s, swept by a blizzard to the Land of Oz — portrayed as a fantasy version of the rest of New York. See the movie's article to learn more about its cast and changes (and if an entry regarding the movie directed you to this page, please correct the link).

In early 2015, NBC and Cirque du Soleil obtained the rights to produce a live, made-for-TV adaptation, following on from the network's moderately successful series of live musicals starting with The Sound of Music Live! in 2013 and Peter Pan Live! in 2014. Tony winner Kenny Leon directed his own who's who of African-American celebrities, including Queen Latifah as the Wiz, and a newcomer as Dorothy, Shanice Williams. This version aired in December 2015, and followed the play more accurately than the movie did. However, the script does make its own embellishments, courtesy of Harvey Fierstein — such as making Dorothy a native of Omaha, Nebraska, who struggled to adjust to life in her new Kansas town prior to landing in Oz.

Not to be confused with The Wizard.

This musical and its adaptations include examples of: