Reading the Stage Directions Out Loud 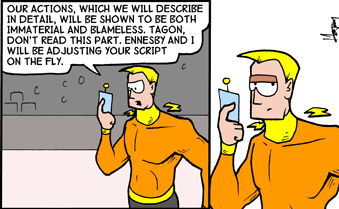 Joey: I can't. Oh, I want to, long pause, but I can't.
Leonard: I'm sorry, sorry. You're not supposed to say "long pause".
Joey: Oh, oh, I thought that was your character's name, you know, I thought you were like an Indian or something.
— Friends, "The One with the Mugging"
Advertisement:

A script is more than just the lines of dialogue and the names of the characters. It also contains numerous on-stage cues which the actor must follow in order to progress the scene. These are part of the scene, but they are indications for the actor to, insert italics, do something. Experienced actors know how to navigate a script and can easily sift the text from the metatext. Inexperienced actors, however… That struck a nerve, do not finish that sentence. New paragraph.

This trope comes into play when a character unfamiliar with script format is unaware that not everything on the page is part of the spoken text. He may well start, WikiWord, Reading The Stage Directions Out Loud. New… oh.

Can be justified in some cases by nervousness or inexperience, although like most comedy tropes, the real important qualifier here is the, wik-oh, Rule of Funny. No matter how ludicrous the directions in question may sound, a character who doesn't know any better will read all of them.

See Reading Ahead in the Script, Repeat After Me, Saying Sound Effects Out Loud, as well as some examples of Hello, [Insert Name Here] for tropes which use the same basic principle of humor, open parenthesis (saying stuff that the character is not supposed to be saying, close parenthesis). A staple of Bad "Bad Acting". End of description, insert line, open list of examples. Oh, damn.

The inverse of Overly Literal Transcription.

A variation of this occurs where the original person says their actual name, and the response includes this name instead of the person or people's actual names.

When there's a Predator

In the fanfiction Digimon 3: Digimon vs Predator, a misplaced quotation mark makes it appear the titular Digimon is reading the script a little too closely.

When there's a Predator

In the fanfiction Digimon 3: Digimon vs Predator, a misplaced quotation mark makes it appear the titular Digimon is reading the script a little too closely.