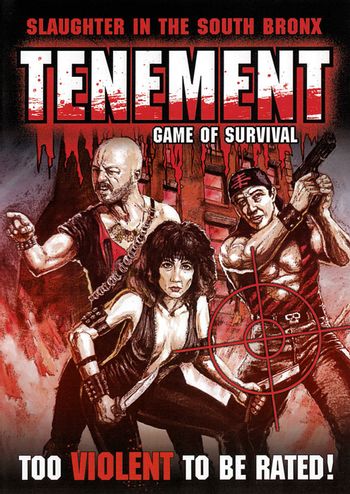 Perhaps it's a light family-friendly comedy?
"It's almost as if this movie is some kind of exploitative piece that likes showing violence and naked women for no reason whatsoever. There really should be a name for this genre. Exploit...? Exploitate...? Ahh, I'll think of it later."
— The Cinema Snob, Bloodsucking Freaks review
Advertisement:

A film which focuses on morbid elements a lot, the type of morbid elements that fascinate or excite people. For example, a crime movie which focuses more on the details of committing the crime or its effects on the victim, rather than the efforts to solve it. Or a movie that's excessively violent for no real reason. In fact, that — excessive violence or sexuality — seems to be the main definition of an exploitation film. "Raw" is the name of the game. Bonus points if the production has that "low-budget" feel to it, though it isn't strictly necessary.

In the past, such films were sometimes made featuring lurid scenes with the supposed intent to be educational, such as Reefer Madness. However, the lurid scenes were often meant to be the main source of entertainment.

In The '60s and The '70s, these films reached something of a Golden Age — perhaps in response to the "arty" mainstream films of the Hollywood Renaissance. This was the era of drive-in "grindhouse" double-features and limited releases touring around the country with crackly prints and at times missing reels. It was also the era of Blaxploitation.

It's sometimes debatable as to whether a given film is an Exploitation Film or not. If there's a heavy emphasis on plot and background detail, yet at the same time the visceral elements are emphasized and played up in detail, then people will disagree on whether or not it fits this category. For example, The Passion of the Christ goes into a ton of detail in watching Jesus be tortured. Yet, many churches were turning out in droves to see it, despite it being a film that consists of two hours of torture followed by the death of the lead character. Due to the movie's theme and background material, some argue that it isn't exploitation at all, since Jesus's torture was not intended for the audience's excitement, while others argue precisely the contrary.

That's part of the dividing line. Is the violence or sexuality contained within a movie gratuitous, meant largely for entertainment? Or is it used to enhance the plot or theme? Since The Girl Next Door is a fictionalized story based on a true crime involving a real girl who was systematically abused by her family, what is it? Is it exploitation because the story itself is fictionalized and involves made-up characters instead of literally retelling the story of the crime? And even if it did retell the story of actual crime, would it still be exploitation?

Because one person's "gritty realistic drama" is another's "entertainingly realistic grit", the line can sometimes be pretty thin.

Most exploitation films, by their nature, tend to be B-movies.

Examples will be subjective:

The Gates of Hell ITSELF Couldn't Hold Back Their UNSORTED BUSINESS!

SPEAKER-SHATTERING! BONE-BLASTING! A Music Massacre!
PERVERTED Tabletop Games From the FREAKISH forests of CANNIBALISM!
Only SICK Video Games Could Sate His UNNATURAL Lusts!
Visual Novels—Too FILTHY for Text Alone!
Daddy? Daddy? Why Are You Screaming? Why Are You Crying? Don't You Love My Web Originals?