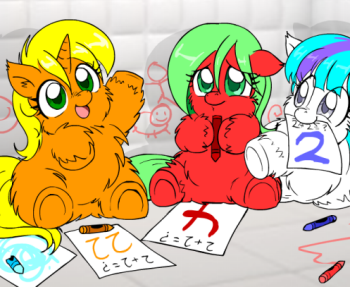 Fluffy Pony is a fandom that sprung out of Friendship is Magic and 4chan. Beginning with the simple concept of "ponies with fluff" (as in having thick, fluffy fur), it quickly gained a communal universe.

The premise is simple: 20 Minutes in the Future, Hasbro creates a genetic engineering wing, Hasbio. To capitalize on the insane success of Friendship is Magic, they create the world's first "biotoy" (a term which is intentionally divisive, referring to the concept of a living thing created and marketed as if it were a toy). This was the Fluffy Pony, a bulldog-sized creature that resembled a G4 My Little Pony with wool-like fluff. Fluffy ponies are bio-programmed; though they have their own minds and can differ drastically, they all start off with the same core information. They innately understand English and can speak their own cutesy dialect, commonly referred to as Fluffspeak. Fluffspeak is mostly an executive's idea of what sounds cute (replacing L and R with W, mispronouncing big words, adding -ies as a plural, etc) combined with a sanitized dictionary (poopies, no-no place.) Fluffy ponies come in 4 races: Earth Fluffies, Unicorns, Pegasi and Alicorns. The differences are mainly cosmetic (pegasi cannot fly, unicorns can make harmless sparks at most), though their personalities are all different.

After hearing of this, PETA ruled Hasbio's actions to be unethical and abominable, and thus infiltrated the lab, freeing all the fluffies being produced at Hasbio. There were three problems with this: the fluffies are still prototypes and flawed, fluffies were never meant to breed outside of Hasbio and fluffies were never meant to live outside of a home or store. The released fluffies have a very high breeding rate; this, along with their cuteness, causes people to begin breeding and selling fluffies across America.

While many fluffies found loving homes and affectionate caretakers, many more wound up on the streets, in the wild, or, even worse (and very frequently in art), end up in the hands of abusive owners. The fluffies on the streets or in the wild become feral, becoming an invasive species akin to feral hogs and being similarly disruptive to ecosystems. The fluffies in abusive households or custodies, however, are subjected to various tortures, being cut up, quadruple-amputated, dismembered, put into breeding mills, trampled under foot, crushed, fed to carnivorous animals, having their foals brutally killed while they are helpless to intervene, and various combinations of the aforementioned abuses that their sadistic caretakers subject them to. Unlike the naturally-occurring animals that humans domesticated (such as dogs, cats, pigs, cows, and real horses), fluffies get relatively little sympathy from those who don't own one, often being derogatorily referred to as "shitrats" (a pejorative derived from their infamous bowel incontinence, the fact that fluffy foals are about the size of a rat and newborn fluffies are about the size of a mouse, and that foals too young to develop speech will squeak and squeal like rats), and will often run afoul of garbage collectors, pest control, and wildlife management officials.

An important point to note is that the fluffy pony fandom has no defined canon. Rather, it encourages the widespread use of "headcanon", a cross-fandom term in which every creator has their own specific rules for The 'Verse (in this case the fluffies). There are concepts that are popular and virtually unchangeable (personalities, speech patterns, love of spaghetti), but much of what makes a fluffy pony is subject to the creator (size, whether certain subspecies exist, what the universe of their story is like). This means that many of the tropes here will vary by author/story.

Almost all fluffy pony works are on Fluffycommunity

. Go there at your own risk.

Compare Ask Fluffle Puff, who is aesthetically a fluffy pony, but depicted in a much kinder light than most "fluffy pony" stories.

Please do not add tropes for specific small stories; rather, tropes here should be broad tropes that show up in many works.

The longest fluffy pony work so far, The Fall Of Cleveland, has its own page.