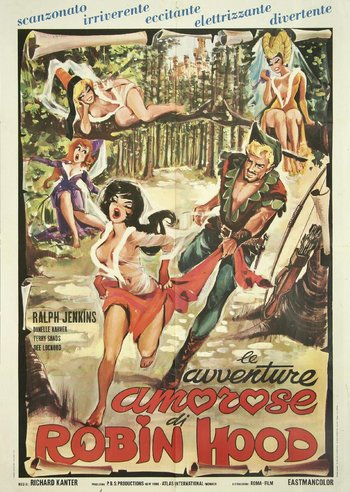 While King Richard is imprisoned by the Normans, his evil brother John usurps the throne and wreaks pillage, rape, and oppressive taxation on the populace. John and his men forcibly enter the castle of young Robin's father and kill the Earl when he refuses to pledge allegiance. Young Robin watches the brutes rape and kill his mother, and he vows revenge against John and his band. Five years later young Robin is known as Robin Hood, champion of the common people, and he has cleverly resisted John's attempts to capture him. Lady Sallyforth, the sister of John and Richard who has allied herself with John, sends Maid Marion, Robin Hood's childhood sweetheart, into Sherwood Forest to lure Robin Hood out of the forest. Robin Hood's men take Maid Marion to their leader, and the lovers are reunited. Marion relates to Robin Hood the evil king's efforts to capture him; and Robin allows himself to be captured. He confronts John and leads his men in a spirited battle in which John is killed and his allies subdued, thus restoring Richard to the throne.